Students, educators and alumni evaluate the experience of the most important rite of passage for performing arts students at UCSB.

Parents, teachers and students braved the stormy winter weather to crowd the lobby of UC Santa Barbara’s Hatlen Theater at the Dance Department’s undergraduate program audition, held on the last weekend of January. That day, eighty-two lined up to receive their numbers, changing out of their coats into tights and toe shoes to vie for a place at the department’s Bachelor of Arts and Bachelor of Fine Arts programs. 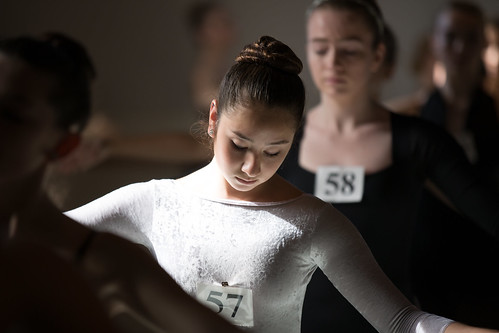 Despite a drop in the number of humanities majors at American colleges over the past decade, UC Santa Barbara’s performing arts programs in music, dance and theater have experienced a recent surge of applicants. According to dance department staff, over eighty students attended the second spring audition round in February. Another audition round will open in September.

This year, the dance department began recruitment efforts at high schools and regional dance festivals throughout California, attracting top young talents like Orange County high school senior Simone Cameresi. “I feel ready,” said Cameresi, who was accepted to the Joffrey Ballet School’s Year Round Trainee Program and the Complexions Contemporary Ballet Company’s summer program in New York. “I think the faculty has the harder job having to decide who to take and who to cut.”

Christina McCarthy `94, who serves as the Acting Vice Chair of UCSB’s Theater and Dance Department and Director of Dance, has made a lot of tough decisions at audition panels over the years. “It’s heartbreaking to have to say no to some of these kids,” she said. “Some of them put the time in, but they ended up in a studio that did not give a very strong foundation.”

After presenting current student performances at an orientation showcase, faculty members observed applicants at the two-part ballet and modern dance audition class. Transfer students with more experience presented their own choreography. All applicants had to submit a personal essay.

“We are also looking for performers who are authentic and present – and who love it,” said McCarthy. “If someone gets up there and does everything perfectly like a robot, we’re not quite so interested. We read the essay to uncover their personalities – to find out if this person will fit into our network of students and faculty. This is a family – will they belong?”

Applicant Jack Patillo started dancing in his freshman year to fulfill P.E. credits. He now trains at the Dmitri Kulev Classical Ballet Academy and hopes to further refine his dance chops at UC Santa Barbara. “I would love to be dancing as much as I can in college, especially with the connections that the department has,” he said. “It seems like an amazing program.”

Patillo dreams of balancing a career in dance performance with another artistic avenue like architecture or interior design. This double major focus is not uncommon among dance and theater applicants. “What this does is create a pool of students who are dancers with other interests and are into other disciplines,” said McCarthy, who started her own college career at UC Santa Barbara as an engineering major before switching to dance. “It makes them very rich human beings.”

AN EAR FOR TALENT

At the UCSB Music Department, two audition dates are held in January for those seeking a Bachelor of Music degree.

Twin flautists Elizabeth and Eliana Van Renterghem faced their panels on the same day in separate rooms. “I admit I’m nervous, but actually I think that is a good sign – because nerves mean you want to do your best,” said Eliana. “There’s something freeing about performing…it makes all the hard work pay off. Plus, I like it when things are beautiful.”

As the twins played for their panels, their mother Janet waited in the hall with Adriane Hill `15, an accomplished flautist who serves as the department’s Marketing and Communications Manager.

“They sound so professional,” whispered Hill as she listened outside to the music emanating from the audition rooms. “It’s hard to believe they are so young.”

The Van Renterghem girls credit the academic flexibility and artistic discipline of their homeschooled education. “We’ve had the opportunity to put music on the priority list,” said Elizabeth. The girls practice flute early in the morning and end every day working on their piano technique. Every weekend, they rehearse with the Santa Barbara Youth Symphony conducted by Andy Radford.

Their flute teacher Andrea Eden Di Maggio `04 was a student of Music Department Chair Jill Felber. Her husband Neil Di Maggio `05 taught the girls piano technique for years. “We’ve worked very hard this year to prepare them – carefully choosing repertoire and learning it cleanly and properly,” said Di Maggio. “They have a developing relationship with Professor Felber, having played for her in master classes and in lessons, so I know they will do their very best.”

Last year, the department recorded a 50 percent increase in performance applicants.  “The department’s ability to attract these highly-qualified applicants is a reflection of our world-renowned faculty as well as recent changes in the curriculum and more flexible degree programs,” said Felber. The department also offers more opportunities for double majors, as well as emphases in Western art music, ethnomusicology and interdisciplinary studies.

“Artists tend to not always be confident about their capabilities. It’s always very heartbreaking to put yourself out there in that way, when you ask `Am I good enough?’”
Christina McCarthy `94
Vice Chair of UCSB’s Theater and Dance Department
Acting Vice Chair and Director of Dance

For Juliet Powar, a fourth year vocal performance major, auditioning for the program meant she got to perform. “As an undergrad, I got a lot of opportunities in performance that I wouldn’t have gotten had I gone to Indiana, North Texas or even USC,” she said. “As someone really shy, it was important for me to get experience. That’s why I’ve opened up so much – because I have really seen what it’s like to be on stage and how thrilling that is.”

Powar’s mentor Dr. Linda DiFiore, Professor Adjunct and Area Head of the UCSB Voice Program, has served at several universities throughout her 40-year career, including Eastman, the University of North Texas and the University of Florida. “The audition is very important,” she said. “You can’t just talk about singing – you have to sing. It can be all over the map in terms of technique. It may not line up. But if I hear one good note, we can build on that. One good note.” She smiled and looked at Powar. “She had that.”

“I had major issues just acting and getting up on stage,” said Powar. “Dr. D makes us sing in every studio class. I wasn’t used to that – getting up weekly. You have to treat every one of her classes like an audition.”

“An audience will motivate you,” said DiFiore. “Singing, in its most basic form, is an act of giving. If the artist is focusing on communicating and engaging with the audience, it is much easier to overcome insecurities and truly enjoy the performance experience.”

“Because we take students in the sophomore year, we tend to get a lot of transfer students,” said Risa Brainin, Chair and Director of Performance at the UCSB Theater and Dance Department. “They’re usually terrific – they’ve had a couple of years in a community college and they’re really ready to get serious about their training.”

Transfer student Diane Fidalgo first auditioned for the program during the first round of auditions last year. “I tried not to guess what the faculty might be looking for – but insecurities sneak in!” she said. “We were expected to prepare two contrasting monologues and to be ready to make adjustments to our performances.”

Fidalgo didn’t make the cut during her first audition. “It wasn’t until the second round of auditions in the fall that I was asked into the program,” she said. “Having two separate auditions in spring and fall did allow me to ask the faculty for feedback and to adjust my audition pieces.”

Now in her second quarter at the UCSB theater program, Fidalgo took the stage as Mistress Quickly in the Naked Shakes production of Death of Kings, Irwin Appel’s adaptation of Shakespeare’s history plays. Her fellow Death of Kings cast member Fletcher Hoffman, who played Pistol, recently went through the BFA audition process at the end of his freshman year at UCSB.

“It was a wonderful experience,” he said. The son of actors, Hoffman had been auditioning since middle school for acting programs and productions. “Why theater?” he asked. “Why not? It’s what I love to do.”

For those who don’t make the cut, Brainin says there are other options. “If they don’t get into this program, there are many other avenues to take within the department,” she said. “Sometimes you find people who are in-between. They’ve got something but it’s not very well-developed yet. Usually when we find a person like that, we give them feedback on what they need to work on and what steps they can take.”

Auditions are a constant throughout a professional artist’s life. At UCSB, educators treat the entrance audition as the rite of passage – and as the first of many trials to test creative potential, technique and adaptability. “Students have to audition for EVERY show here,” said Brainin. “They gotta earn that part every single time.”

“As a gateway into college, auditioning in this way is a really good exercise for a student,” said McCarthy. “It really is a professional experience. This is how it would be if you were going into the world of music, the world of dance, the world of theater – you have to audition. I sometimes feel that the Rubrics they use to judge college entrance in other areas are not really realistic. They are based on the idea of you being a student who takes tests and gets certain kinds of grades. But the audition is asking you who you are and what can you bring to the job of being part of UCSB’s performing arts.”